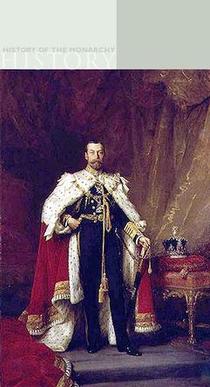 Reigned: 1910 - 1936. Born third in line to the throne, after his father (who became King Edward VII) and his elder brother Prince Albert Victor, who died early.  Crowned on 22 June 1911. Married Princess Mary of Teck in 1893. Shy and solitary, he was good friends with his cousin Nicholas II of Russia, who had a similar disposition, having spent childhood holidays together. They also looked alike, to the extent that they could be mistaken for each other. When Nicholas II abdicated in 1917 the British government offered asylum but George was vigorously opposed. Nicholas was not popular in Britain and George did not wish to be so closely associated with him. 18 months later the whole Russian royal family was assassinated.

This section lists the memorials where the subject on this page is commemorated:
King George V

The Guardian has a detailed description of the procession from Charing Cross ...

This section lists the memorials created by the subject on this page:
King George V

This is the foundation stone of the 1928 Lloyd's building.