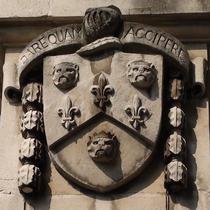 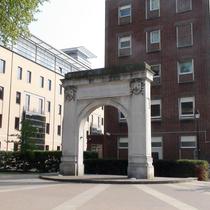 {The northern side of this monument holds 94 names from WW2, the southern 131 from WW1. See Subjects Commemorated for the names.}

Fascinated by the street name "Great Maze Pond" we learn that in the 14th century the area of gardens and walks to the north of Tooley Street was called "The Maze" which subsequently gave way to the "Manor of the Maze". But was there an actual maze? We can't find out.

2022: Sebastian Bulmer wrote to tell us about Kings Collections which presents the information it holds about the names on this memorial arch: "The records of war dead published here record both the staff and students of Guy's Hospital and its Medical School to have died during twentieth century conflict. Many of their names are recorded on a Portland stone memorial arch designed by William Walford, which was unveiled by the Duke of York in July 1921, and which now sits in the Memorial Park at the heart of King's College's Guy's Campus. The College's principal remembrance service is held here annually on Armistice Day."

This section lists the subjects commemorated on the memorial on this page:
Guy's War Memorial

This section lists the subjects who helped to create/erect the memorial on this page:
Guy's War Memorial

This section lists the other memorials at the same location as the memorial on this page:
Guy's War Memorial

{The plinth and the cross are both 6-sided:}{On the plinth, facing Dean Stanl...