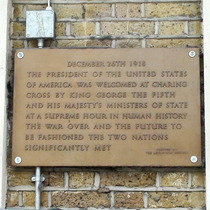 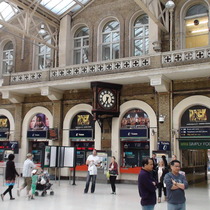 December 26th 1918
The President of the United States of America was welcomed at Charing Cross by King George the Fifth and His Majesty's ministers of state at a supreme hour in human history, the war over and the future to be fashioned, the two nations significantly met.
Erected by the Angle-kin Society.

The Guardian has a detailed description of the procession from Charing Cross to Buckingham Palace.  The war had been won; the Americans had helped us (hem) and everyone was feeling celebratory so there was a magnificent procession via Trafalgar Square, Pall Mall, Piccadilly, Hyde Park Corner, Constitution Hill.  The carriage contained President Wilson and his wife, King George V, Queen Mary and their daughter Princess Mary.  Our photo of Wilson shows them all on arrival at the Palace.  The route was lined with flags, soldiers and WAACS, Wrens, and WRAFS.  Crowds cheered; there was an aerial display.  As the carriage passed Marlborough House Queen Alexandra (the King’s aged mum), came out on the pavement with the Queen of Norway (grand-daughter of Queen Victoria) and Prince Olaf.   Hurrah!

2016: Londonist raised the question of where Wilson arrived from. We rummaged around and found History.com which tells us that on 4 December 1918 Wilson left Washington "on the first European trip by a U.S. president." He arrived in France at Brest and went overland to the Versailles Peace Conference (officially ending WW1).  Wikipedia describes Charing Cross Station as "providing a boat train service to Europe", so that's where he came from.

Ian Visits has a good post about this station from its inception.

This section lists the subjects commemorated on the memorial on this page:
Charing Cross Station - US President

This section lists the subjects who helped to create/erect the memorial on this page:
Charing Cross Station - US President

The only reference we could find to this society was on the website of the Na...

This section lists the other memorials at the same location as the memorial on this page:
Charing Cross Station - US President