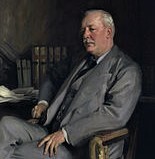 Colonial administrator for Egypt. Grandson of the bank founder Sir Francis. Recipient of the telegrams sent by General Gordon during the siege of Khartoum, 20 or 30 every day. Died London.

2018: A critical Londonist article gives: "As Governor of Egypt he repressed native schools, opposed women becoming doctors, or even being educated. When some British officers shot pigeons in a village, the villagers protested that they owned the pigeons. An argument ensued, one officer collapsed with heatstroke: 27 villagers were flogged, including pregnant women, and the Headman was hanged outside his own house. After George Bernard Shaw led protests about this injustice, Baring was persuaded to resign, but given £50,000 and made Earl of Cromer. Back home in London, he became president of the Men's League for Opposing Woman Suffrage."

Our picture source gives a biography of this man.

This section lists the memorials where the subject on this page is commemorated:
Evelyn Baring, 1st Earl of Cromer

We have discovered two facts about a John Roy Lancaster: In 1911 he was work...