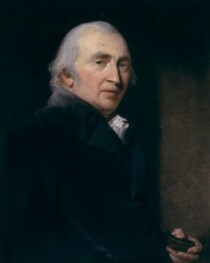 His father died when he was about five years old, and he then moved with his mother to Brinkworth, Wiltshire. In his teens, he was sent to London to become apprenticed to an uncle, who was a pastry cook in Maiden Lane, Covent Garden. He was encouraged to pursue his artistic inclinations’ by his next door neighbour, the draughtsman and engraver, John Miller.

Gaining premiums from the Society of Arts for a still life drawing in 1763 and an equestrian subject in 1764, Hearne became apprenticed to the engraver, William Woollett, in 1765.

During the years of his apprenticeship, he exhibited watercolours at the Free Society of Artists and the Society of Artists of Great Britain, in a style influenced by Paul Sandby, and decided to become an artist rather than an engraver. Woollett introduced him to his friend, the Reverend Charles Davy, and, for six weeks of the spring of 1771, they stayed with Davy at his home in Henstead, Suffolk. There they were joined by the 18-year-old Sir George Beaumont, to whom Davy had been his tutor at Eton. Beaumont developed a passion for drawing at this time, and would become one of his most important patrons.

Later in 1771, he was appointed draughtsman to Sir Ralph Payne, the new Captain-General and Governor-in-Chief of the Leeward Islands, a group of sugar colonies in the Caribbean. He stayed for three and a half years recording the terrain, the towns and the inhabitants in order to celebrate Payne’s successful stewardship. In 1775, he and Payne returned to England, and he spent a year and a half preparing the work that he had produced for engraving.

Though never going abroad again, he travelled widely in Britain. From 1777, he worked with the engraver, William Byrne, providing 84 drawings for Antiquities of Great-Britain, a record of the nation’s historic monuments that was completed in 1807. The series has been considered to have set a new standard in the pictorial recording of mediaeval architecture and it led to him being elected a member of the Society of Antiquaries in 1793. Byrne also issued Rural Sports (1780), a smaller set of Hearne’s designs, and literary titles, including Oliver Goldsmith’s The Vicar of Wakefield (1780) and Henry Fielding’s Joseph Andrews (1781-88), with Hearne’s illustrations. Fifteen of his drawings would be engraved for Britannia Depicta, one of Byrne’s later projects, issued between 1806 and 1818.

Many of his travels were made in the company of Sir George Beaumont. These included a visit to the Lake District in 1777, on which they were joined by the painter and diarist, Joseph Farington. In the following year, he and Farington joined Beaumont and his new wife, Margaret, on a tour to Scotland. Then, in 1794, he and Beaumont journeyed along the Wye valley.

By 1782, he had met the collector and writer, Richard Payne Knight. In that year, he took on the task of executing a number of watercolours of Sicily, which he worked up from sketches by Jakob Philipp Hackert and Charles Gore that they had made in the company of Knight during a tour of 1777. Between 1784 and 1786, he made visits to Knight’s estate at Downton Castle, Herefordshire, in order to record the newly landscaped grounds. A decade later, he would provide illustrations to Knight's The Landscape: A Didactic Poem (1794).

Between 1785 and 1793, he exhibited work at the Royal Academy but then stopped because he did not like the way that watercolours were hung, and would only show there once more, in 1806. However, his work also became known through the ‘academy’ of the physician, Dr Thomas Monro, which was held at 8 Adelphi Terrace, Monro’s home from 1794. Monro made available fine examples of master watercolourists, for such younger artists as Thomas Girtin and J. M. W. Turner to copy, and especially those of Hearne, so becoming his leading patron from this time. In turn, Hearne became a good friend of Monro and his family, often visiting Adelphi Terrace, and staying at his country houses, at Fetcham, Surrey, and, after 1805, Bushey, Hertfordshire.

In old age, he was supported by friends, including Sir George Beaumont, who, for example, in 1808 had him to stay at his ancestral seat of Coleorton Hall, Coleorton, Coalville, Leicestershire. Having remained a bachelor, he died, aged 72 years, on 13 April 1817 at 5 Macclesfield Street, Soho, his home of more than 30 years. Monro paid for his funeral, and had his body interred in the churchyard of St James’s, Bushey. He lies beside Monro and their mutual friend, the artist, Henry Edridge.

This section lists the memorials where the subject on this page is commemorated:
Thomas Hearne

Portrait and equestrian painter. Our picture source gives a biography of his ...

Comic artist and illustrator. Born in Finsbury Park. He started his career as...

Watercolour painter.  Probably born in London.  Travelled on the Continent.  ...

Master gun-founder and artist. Born at Enkhuizen in the Netherlands. After an...