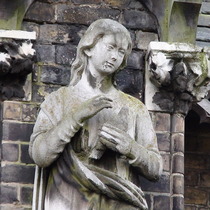 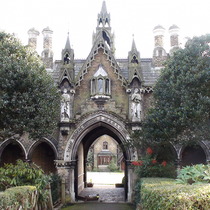 This charming Victorian gothic development of 12 Grade 2 listed homes, completed in 1865 was at the southern extremity of the Holly Lodge estate, the Burdett-Coutts' property, which stretched all the way to the top of Highgate West Hill. Holly Village, the first gated housing development, was created by Baroness Burdett-Coutts. 'The Story of Holly Lodge' by Margaret Downing, March 2009, describes it thus: "Her one entirely commercial venture was Holly Village, a group of 12 houses designed by Henry Darbishire in the fashionable neo-Gothic style ... and leased to middle class tenants at market rates." When the Holly Lodge estate was broken up and sold in 1922 the Village was bought by a consortium of its tenants.

The statues on either side of the entrance are said to represent (in idealised form) Angela herself, on the left holding the little dog, and her friend, Mrs Hannah Brown on the right, holding a dove. The ill-favoured Angela and a little dog (similar to that here) are depicted at London Historians.

This section lists the subjects commemorated on the memorial on this page:
Hannah Brown statue

This section lists the other memorials at the same location as the memorial on this page:
Hannah Brown statue

{Carved in the masonry around the arch of the main entrance:} Holly Village e...