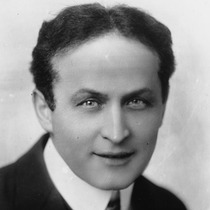 Escape artist. Born Erik Weisz in Budapest. Later names include: Ehrich Weiss, Harry Weiss. The family moved to the US in 1878. Married fellow performer, Bess, in 1894 and she was his stage assistant for the rest of his career.  Arrive in London in 1900 and, following a handcuff trick at Scotland Yard, was booked at the Alhambra. He then toured very successfully, in the UK, Europe and beyond. He was an enthusiast for debunking spiritualists, using his knowledge of magic tricks.

Died following an incident in his dressing room when he allowed a student to punch him in the stomach to prove that it would do him no harm, but it did.

This section lists the memorials where the subject on this page is commemorated:
Harry Houdini

This was started by John Redington, selling printed sheets of characters and ...

Actor and theatre manager. Born at 2 Pembridge Villas. Max Beerbohm was his h...