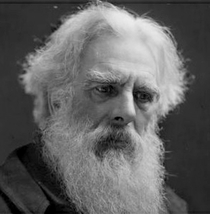 Photographer and motion picture pioneer. Born Edward James Muggeridge in Kingston upon Thames. He changed his name, probably inspired by the recent discovery in Kingston of a Saxon coronation stone memorialising two King Eadweards. The press mocked this change an as 'eadvertisement'. He spent a lot of time in America, becoming chief photographer to the U.S. government.

Best known for his pioneering work on animal locomotion, which used multiple cameras to capture motion in stop-motion photographs, and his zoopraxiscope, a device for projecting motion pictures that pre-dated the flexible perforated film strip used in cinematography. In 1874, he shot and killed his wife's lover, but was acquitted on the grounds of justifiable homicide. The Science Museum informs that he died in Kingston while digging a miniature scale reproduction of the Great Lakes in his garden.

This section lists the memorials where the subject on this page is commemorated:
Eadweard Muybridge