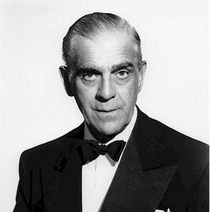 Actor. Born as William Henry Pratt at the house with the plaque. His acting career began in the theatre in Canada, where he adopted his stage name. Arriving in Hollywood he appeared in dozens of silent films, before being cast as Frankenstein's monster which shot him to stardom. More horror films followed, including 'The Mummy', 'The Mask of Fu Manchu' and a reprise of his most famous role in 'The Bride of Frankenstein'. He went on to perform in several Broadway productions and television series, and eventually returned to Britain. Died in the King Edward VII Hospital, Midhurst, Sussex.

This section lists the memorials where the subject on this page is commemorated:
Boris Karloff