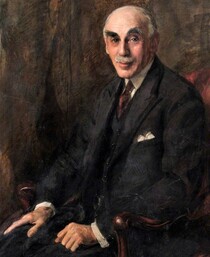 Founder of the Ardath Tobacco Company. Honorary Treasurer at the Royal Free Hospital in 1926. See Lord Riddell. Also helped fund the 1928 new extension for which the maternity section was named the Albert Levy Wing. The Jewish Lives Project website gives a résumé of his life.

In the 1901 census he is shown as a tobacco manufacturer living at 12 Randolph Crescent, Maida Vale, with his wife, their daughter - Hylda, together with four domestic servants: a page, a housemaid, a cook & a monthly nurse. When he completed the 1911 census he described himself as tobacco manufacturer living in a 14 roomed property at 42 Hans Mansions, London, SW, with his wife, his three daughters, together with five female servants: a governess, a cook, a kitchen-maid, a parlour-maid and a house-maid.

Electoral registers from 1918 to 1921 show him still residing at 42 Hans Mansions, but he was also registered as a business voter for a property at 101 Pavillion Road, Notting Hill.

In the 1929 New Year Honours List, as the Treasurer of the Royal Free Hospital, he was created a Knight Bachelor, for benefactions.

Probate records confirm that he resided at both Westbrook House, Elstead, Surrey and at Devonshire House, Piccadilly, London, W1. It was at the latter address where he died, aged 73 years, on 5 September 1937 and on 7 September 1937 he was buried In Plot C, Row 46, Grave 13 in the Golders Green Jewish Cemetery, Hoop Lane, London, NW11 1NL. Probate was granted on 29 September 1937 jointly to the Westminster Bank Ltd, to his widow and to his son-in-law - Sir Ewart Maurice Levy, baronet (1897-1990), who had married his eldest daughter Hylda. His effects totalled £1,134,866-12s-1d.

This section lists the memorials created by the subject on this page:
Sir Albert Levy

Born and raised in Dublin as Hilary Mary Frayne. Married Galen Weston in 1966...

The production of jam was actually a minor function of this factory, as it pr...

We did not find the website of The British Postal Museum &amp; Archive terri...