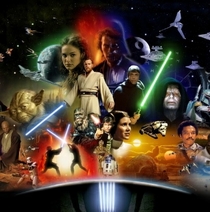 A series of science-fiction films, formulated and originally directed by George Lucas, with the tag-line 'a long time ago in a galaxy far, far away'. The first films comprised a trilogy, and were followed by a prequel, again of three films. As a sequel to the original stories, three further films have been released.

This section lists the memorials where the subject on this page is commemorated:
Star Wars