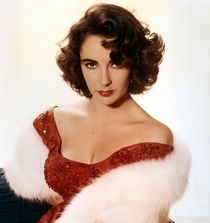 Actor. Born Elizabeth Rosemond Taylor of American parents at Heathwood, 8 Wildwood Road, Hampstead. Fearing the outbreak of war, her family moved to America in 1939. She was seen as a potential film actor, and was cast in several minor roles before winning the lead role in 'National Velvet' in 1944. As an adult her career blossomed and she appeared in more than fifty films including 'Giant', 'Cat on a Hot Tin Roof', 'Suddenly Last Summer', 'Cleopatra' and 'Who's Afraid of Virginia Woolf?', and her many awards included two Oscars. She was married eight times - twice to Richard Burton.

Her popularity started to wane in the late 1960s and after several unsuccessful films she appeared in mainly cameo roles. She became one of the first celebrities to participate in HIV/AIDS activism, helping to raise more than $270 million for the cause during her lifetime. Created a DBE in 1999, her later years were dogged by ill-health and addiction. Died in the Cedars-Sinai Medical Center, Los Angeles.

Apparently there is a 1963 CBS 1 hour TV film 'Elizabeth Taylor in London'. So far we've failed to find it on-line or on DVD, though it seems the music is available. We really want to see this film!

This section lists the memorials where the subject on this page is commemorated:
Elizabeth Taylor

We are grateful to David Lewis, Chairman of the Hampstead Garden Suburb Resid...

Character in the Star Wars series. In the original films, he trains Luke Skyw...

Sir Peter Reginald Frederick Hall CBE was a theatre and film director who was...