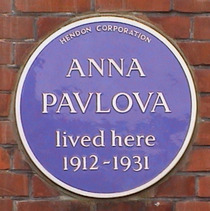 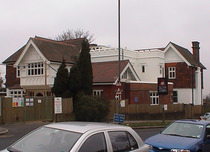 2014: The current occupants, the London Jewish Cultural Centre, have announced that they will be moving into new premises on Finchley Road, NW3, and this building will be up for sale next year.

2018: Natasha Dissanayake wrote via Facebook telling us that the new occupants, St Anthony’s School for Girls, an independent Catholic school, have installed a high wooden fence that means one can no longer see the plaque. The plaque wasn't erected by English Heritage so we can't complain to them. The Borough of Hendon was incorporated into Barnet in 1965 so they are the body responsible, we think. For the time being we'll mark the plaque as "lost".

2020: Steve Roffey, via Facebook reported: "Possibly at the same time that English Heritage installed its plaque commemorating SIr William Bowman at the same address in 2019, the height of the fence was reduced and the Pavlova plaque is visible once again." Thanks Steve. We need to revisit and take some more photos.

This section lists the subjects commemorated on the memorial on this page:
Anna Pavlova

This section lists the subjects who helped to create/erect the memorial on this page:
Anna Pavlova

The Borough of Hendon was incorporate into Barnet in 1965.

{On the top plaque:} King's Cross Disaster Fund In memory of the 31 people wh...

Not a memorial but we wanted to include this sign, partly for completeness bu...

We failed to find this plaque in Dec-Jan 2017 so are grateful to Spitalfields...