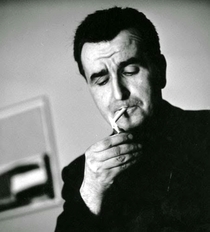 Diplomat, art critic, broadcaster, film producer and lecturer. Born Petar Christoff Ouvaliev in Sofia, Bulgaria. He came to Britain in 1947 as a diplomat. His extensive career in the British film industry as writer/producer included the films 'The Millionairess' and 'Blow Up'. He was also a talented writer, in both English and Bulgarian, and for over 40 years broadcast regularly on the Bulgarian service of the BBC World Service.

This section lists the memorials where the subject on this page is commemorated:
Pierre Rouve

We contacted a colleague who speaks Bulgarian, and she confirms that the righ...

Artist and Designer. Born Eric William Ravilious, at Acton, (He claimed his s...

A design enterprise founded by Roger Fry and members of the Bloomsbury Group....