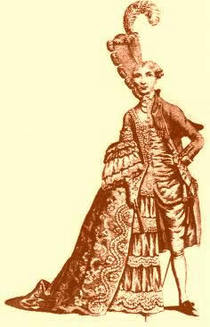 Diplomat and transvestite. Born Tonnerre, Burgundy, France. Full name: D'Éon de Beaumont, Charles Geneviève Louis Auguste André Timothée, born of the French nobility. Up until 1763 he had a distinguished career as a diplomat, spy and soldier.  In London from 1763. As part of his battle to be paid correctly he published his correspondence with the French authorities. The resulting libel case forced him into hiding in female disguise. The negotiations over payments continued and in 1777, some sort of settlement was reached and he attempted to return to France as a man but by this time there were serious doubts as to his true gender and in France he was required to dress as a woman, although he was paid an additional amount for his trousseau. So in 1785 he returned to Brewer Street where he continued life as a woman earning income by giving demonstrations of his fencing skills. He died at 26 New Milman Street where he was living, as a woman, with a woman.

After death he was examined by doctors and declared a complete man. He was buried at St Pancras Old Church graveyard where in the 1860s his grave, along with many others, was moved and lost to make way for the Midland Railway.

The splendid Library Time Machine has a well-illustrated post.

2020: Some parts of his story have other versions. The Soho Bites podcast does a great job at explaining this complex history.

This section lists the memorials where the subject on this page is commemorated:
Chevalier d'Eon