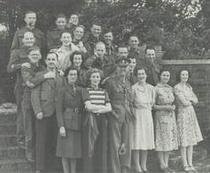 Born Rochester, Kent to a naval family. He entered the navy, rose to Rear-Adm...

In 1943 Norwegian resistance commandos sponsored by the SOE raided the enemy-...