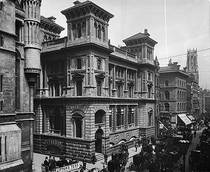 This building is at 194 Fleet Street, between the Law Courts and Chancery Lane.

From 1826 the Bank of England had branches around the country. The Law Courts branch was designed by Sir Arthur Blomfield in association with A. E. Street (son of G. E. Street) and constructed 1886-8.

This remained a branch of the BoE until 1975 when it was occupied by the Bristol & West Building Society. In the 1990s it became a pub, which it still (2021) is: The Old Bank of England.

From Claxity: "According to a 1963 Bank of England publication, “This branch is primarily concerned with the business of the Supreme Court and was opened following suggestions by the Lord Chancellor and the various legal societies.” "

2022: We thank Ken Cook for pointing out an error on this page, now corrected.

This section lists the memorials where the subject on this page is commemorated:
Bank of England, Law Courts branch