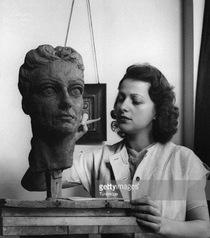 Polish actor and sculptor. 1924 emigrated with her parents to Australia. Moved to New York and then while in Moscow in 1935 married Herbert Marshall and changed her name to his. 1937 they moved to London and co-wrote the 1940 film The Proud Valley. They went on to live in India and then the USA.

She sounds an early feminist, refusing to work with Picasso when he sexually harassed her and expressing a wish to depict more women since they also need to be remembered.

This section lists the memorials created by the subject on this page:
Fredda Brilliant

This seatless statue belongs to the select group of seated London statues - s...