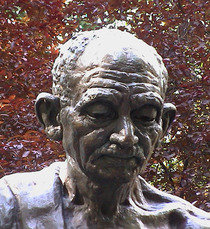 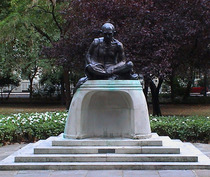 {On the stone below his feet:}
Mahatma Gandhi, 1869 - 1948
{On the plaque on one of the steps:}
The statue erected under aegis of the India League by the Mahatma Gandhi Memorial Committee, was unveiled on the 17th May 1968 by the Prime Minister, the Rt. Hon. Harold Wilson, M.P.
{On the plaque inside the hollow beneath the statue:}
Tavistock Square Gardens
Placed here to commemorate the 125th anniversary of the birth of Mahatma Gandhi by His Excellency the High Commissioner for India, Dr. L.M. Singhvi and the Mayor of Camden, Cllr. Dr. S. N. Deshmukh, 2nd October 1996.
{On the back of the stone support:}
Statue by Fredda Brilliant

From 1888 Gandhi studied at nearby University College London. Menon, who chose this site for the statue, was a member of the Theosophical Society who occupied the building on the square, just north of where Gandhi is facing.

This section lists the subjects commemorated on the memorial on this page:
Gandhi statue - Bloomsbury

This section lists the subjects who helped to create/erect the memorial on this page:
Gandhi statue - Bloomsbury

Erected to commemorate the Trafalgar victory over Napoleon of 1805. The heigh...

Marble and said to be 12-foot high but that must be including the pedastal, s...