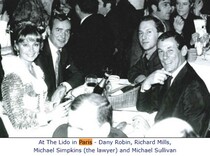 A prominent show business lawyer who apparently had an obituary in The Times (to which we don't have access). Son of G. Simkins. Michael owned the property in which his brother, Roger, ran the Highgate Village Merchant Chandler shop where Roger hung himself on 7 December 1998. For more information about his property developments in Highgate Village, see the page for the plaque.

We don't know for certain that the "Michael Simpkins (the lawyer)" in the photo is our (misspelt) man but given the show-business context it seems very likely. We read the caption as saying that MS is the man at the back right. The picture source places the picture in a section headed "1963" and the two people at the front were married in 1969 so we have an approximate date for the photo.

A friend who works in the field of show biz law set tells us that Simkins set up two different entertainment law firms, the main one being The Simkins Partnership - now Simkins LLP.

The Simkins LLP website provides: "In 1959, Michael Simkins, then a fledgeling {sic} City lawyer, met a talent agent, Leslie Grade, brother of Lew and father of Michael. He began to represent a group of up-and-coming entertainers and, fascinated by the business of the music and film industries, he started to build a group of clients from that world. With their encouragement, he set up his own firm in 1962. The firm grew through the sixties and seventies. The Simkins Partnership became one of a small number of niche practices specialising in the legal and business side of the media and entertainment industries and gained an unparalleled reputation for outstanding deal-making, uncompromising toughness and total confidentiality and discretion for its glamorous clientèle. Over time, the firm grew further into more conventional areas of practice, such as property, corporate and employment, and in 2005 The Simkins Partnership was incorporated into a limited liability partnership."

Our colleague, Andrew Behan, has researched the man and advises that Michael Simkins was born on 3 September 1934, the eldest of the three children of George Simkins (1905-1977) and Gwendoline Doris Simkins née Bargionli (1910-1992). His birth was registered in the Edmonton registration district and his two brothers were Roger Simkins (1937-1998) and Timothy A. G. Simkins (b.1948).

This section lists the memorials created by the subject on this page:
Michael Simkins