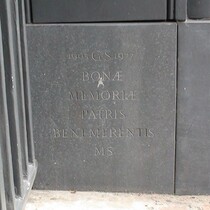 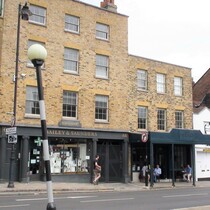 Plaque: The Simkins of Highgate Village

It's believed that this plaque was put in place in the 1980s. Looking for an explanation for its presence here we wonder if Michael Simkins inherited the two properties from his father.

The plaque is unusually low down on the building, below the pillar to the right of the driveway entrance. The plaque forms the left side of the plinth for the pillar.

We are immensely grateful to the Highgate Society and the Highgate Literary and Scientific Institution for all the help they have given us, researching this memorial. Not only did they dive into their archives but they also searched their memories to provide most of the information we give here. What we cannot fully convey is the anger still felt by those who were working with the Society at the time.

The background is that in the 1990s Michael Simkins owned two properties on Highgate High Street: no. 62 (now, 2021, Caffe Nero) and no. 64 (Bailey and Saunders, still a pharmacy). Both have sad histories, associated with Michael Simkins.

Number 62
Although, not the original, the canopy above the doorway gives a clue to the shop's origins.  Before the days of refrigeration and air-conditioning canopies were used, especially by butchers, to keep the sun off shop windows.  Thomas Osborne's butcher shop was already flourishing at number 62 in 1818. The premises continued to be used as a butchers shop until 1918 when the shop became an ironmongers run and owned by C. G. Willis and Son. The Willis family lived above the shop.  Unusually, instead of a back yard, the shop had a rear garden which included a tennis court.  The firm not only sold ironmongery but provided a number of services.  They were locksmiths, bellhangers, lawn mower repairers and makers of the 'Highgate' cycles.  They offered a repair service for kitchen utensils as well as re-enamelling of baths. The firm employed their own plumber who worked in many of Highgate's houses.

The shop was acquired by Mence Smith Store (Proprietors) Ltd in 1954 and a number of household items were added to the stock of ironmongery.  During his life, George Mence Smith owned some 70 hardware stores.  Although George died in 1896, hardware stores continued to bear his name long after his death.

The business changed hands in 1962 and was renamed Cromwell Houseware.  The shop sold china, glass, pine furniture and gifts.  In 1988, the business had a new occupier, Roger Simkins who was the brother of the owner, Michael Simkins. Roger traded as the Merchant Chandler and continued to sell china, glassware etc. and the shop was considered a huge asset to the village. In 1998 Michael Simkins got Caffe Nero as prospective tenants and gave his brother notice to quit. A few days later, the shop assistant arrived one morning to find that Roger had committed suicide, hanging himself in the shop. His widow Grazia tried to continue the business but the shop closed in 1999.

Despite attempts from the Highgate Society to protect the Edwardian shopfront Simkins went on to replace it with the present pastiche Dickensian shopfront without planning consent. The Highgate Society took it up with Haringey, who took enforcement proceedings against him; but he appealed it and the Inspector allowed it to stay. During this period Simkins did not think kindly towards the Society. Spoof advertisements appeared in the shop windows proclaiming the imminent arrival of a sex shop which would offer special rates to Highgate Society members but, in reality, the new occupants were Caffe Nero. The posters were so obscenely defamatory that the police ordered Simkins to take them down.

Number 64
The chemist's shopfront was the oldest and most important in the High Street. On his marriage in 1933 George Simkins is described as a chemist and on the electoral register 1962-5 he and his family are listed as living here, so it's likely that he owned the property and, for a short time, lived above the shop where he worked. George died intestate in 1977 which means that his widow, Gwendoline, most likely would have inherited any property he owned. She died in 1992. Sometime around the mid-late 1990s Michael Simkins got permission to pull down this building, on the grounds that it was a dangerous structure, but on condition that it was rebuilt with the original bricks to the original design, and that the original shopfront was retained and put back. When the completed work was unveiled, it was all too obvious that what had been installed was an unconvincing fibre glass replica; the original shopfront lost. Despite requests from the Society, Haringey Council failed to take enforcement action, and so what is there now remains an affront to Highgate. (The Society points out that the chemist himself had nothing whatever to do with the works.)

The site, and some land behind, is currently owned by one Heath Meek, whom the Society find a refreshing contrast with his predecessor.

The information from the Highgate Society and the Highgate Literary and Scientific Institution was the culmination of the help we have received with this plaque. First it was brought to our attention by Timothy N. Evers; we asked our Latin consultant David Hopkins for his assistance; our show-biz lawyer friend provided the company name. Andrew Behan and David Hopkins provided valuable genealogical research. Many thanks to everyone.

This section lists the subjects commemorated on the memorial on this page:
The Simkins of Highgate Village

George Simkins was born on 17 April 1905 in Stoney Stratford, Buckinghamshire...

This section lists the subjects who helped to create/erect the memorial on this page:
The Simkins of Highgate Village

Ace CafeBuilt 1938 as part of a service area for the new North Circular Road....

Acquired from the trustees by the Corporation of The City of London, 2nd Febr...