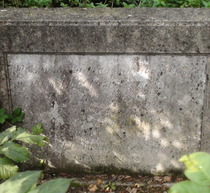 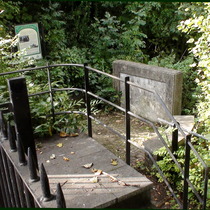 This bank of earth was raised and formed to support the Channel of the New River. And the frame of timber and lead which served that purpose 173 years was removed and taken away.

Clarendon Arch is the oldest surviving structure on the New River, but our visit was spoilt by the gate being locked. Thus: our poor photo of the tablet and our total failure to even see the arch which is below this tablet and reached by a flight of steps.

The information board reads "The Arch, which can be viewed from the bottom of the steps, is the upstream end of a barrel vaulted tunnel which carries the Salmons Brook below Bush Hill. the Brook's source is near Hadley Wood on the Hertfordshire boundary from where it flows eastwards below the New River, on the opposite side of Bush Hill, and finally meets the River Lea at Edmonton.

Originally the Brook was spanned separately by both a bridge and the 'Bush Hill Frame'. This 'Frame', constructed between 1608 and 1613, was a 660 foot lead lined wooden aqueduct that carried the New River in a 6 foot wide and a 5 foot deep trough. The construction was supported on wooden arches some 24 feet above the Brook and known locally as 'Myddelton's boarded river'.

In 1682 the bridge was replaced by an arch which was named after the then Governor of the New River Company, the Earl of Clarendon. This work is commemorated by the carved ornamental keystone, with the inscription 'This arch was rebuilt in the yeare 1682, Honourable {Henry} Earle of Clarendon being Gov.'.  The arch was again rebuilt in 1725 and is now a statutory listed Grade II structure.

In 1786 the 'Bush Hill Frame' was replaced by the present clay embankment that carries the New River, this feature is clearly evident by the New River Path on the opposite side of Bush Hill. These embankment works were commemorated by the adjacent plinth with inset stone tablet that bears the inscription {see our transcription}."

This section lists the subjects commemorated on the memorial on this page:
Clarendon Arch - 1786

This section lists the subjects who helped to create/erect the memorial on this page:
Clarendon Arch - 1786

Governor of the New River Company, in 1786, a Master in Chancery and a direct...

This section lists the other memorials at the same location as the memorial on this page:
Clarendon Arch - 1786

Barnado Gardens. This block was built by the London County Council in 1957. I...

To the memory of those members of the staff of the proprietors of Hay's Wharf...

{Below an image of the communications satellite, Telstar}Joe Meek, record pro...