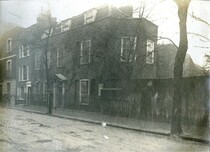 The house and garden can be seen on a number of old maps, such as 1865 OS.

From British History online (written in 1913): "Cheyne House consists of two or three different blocks of buildings, none of which appear to date from earlier than the 18th century. The original house, built about 1715 for the widowed Duchess of Hamilton (daughter of Digby, Lord Gerard) was perhaps set back from the road, within the garden, but the buildings in the rear of the present house have been altered from time to time.... The principal part of the house fronts Upper Cheyne Row, and appears to date from about 1750. It is of two storeys with an attic lighted by dormer windows in the roof. The sash windows are arranged symmetrically and the entrance has a charming doorway with pediment and pilasters enclosing an arched opening. The front wall is of stock brick, finished with a parapet, and there is a deep bay window on the eastern side towards the garden."

Also: "Cheyne House, during the end of the 18th century and the first half of the 19th, was a school, and is marked on Thompson's map as "Cheyne House Academy." Faulkner says (fn. 3) it was carried on in 1829 by Dr. Felix, and formerly by Mr. Edwards. It comprised in 1800 two houses, having apparently absorbed the adjoining building, No. 4, which had just been built. The present part of the house which fronts the street appears to be of mid-18th century date, but this was either an extension or a rebuilding of the first house, which has a continuous tenancy from the Duchess of Hamilton in 1715."

Dr John Samuel Phene (or Phené) (1822 -1912) trained as an architect and owned this house and garden, as well as some land the other side of Oakley Street on which he built Margaretta Terrace and Phene Street. He travelled a lot and filled the Cheyne House and garden with statuary and antique objects d'arts, which he collected. He also built the 'Mystery House' on the corner of Oakley Street and Upper Cheyne Row, and decorated its exterior in an eccentric way.

Phene designed the pub at 9 Phene Street (now called The Phene) and the new wing of the Royal Free Hospital in Gray's Inn Road in the late 1850s. We think this must be the Sussex Wing.

He used Cheyne House and its garden as a museum. When Phene died in 1912 the house remained empty and became derelict until demolished in the 1920s.

Nothing to do with Cheyne House, but Mackintosh Architecture describes how in 1920-21 the great architect Charles Rennie Mackintosh was close to taking on the Mystery House as a project, but it was not to be.

This section lists the memorials where the subject on this page is commemorated:
Cheyne House

Contractors who built 55 Broadway. We found some references to a company of t...

Diplomat and courtier.  Favourite of Queen Henrietta Maria (wife of Charles I...