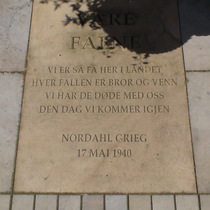 {Translates as:}
The Fallen
So few we are in our country
We are kin with all our slain;
And the dead shall be beside us
The day we return again.

2021: We originally published this memorial with an unsatisfactory translation of the Grieg poem, and a plea for a Norwegian consultant. Two years later, in 2021, Johanne Elster Hanson contacted us with the lovely translation given at "Inscription" and an offer to be that Norwegian consultant. We can safely say that she will not be overworked but it's good to have her in post for the next time we need her services.

Johanne tells us that the translation is by G. M. Gathorne-Hardy and she found it in the book 'All That is Mine Demand: War Poems of Nordahl Grieg' (Hodder & Stoughton LTD, London, 1944). She writes "As a native Norwegian I find Gathorne-Hardy's translation quite remarkable".