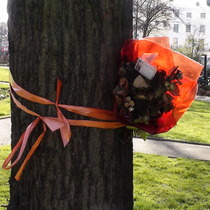 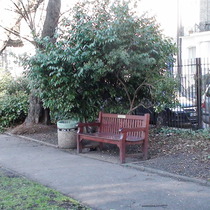 {The bench plaque reads:}
Dedicated on September 9th 2010 on the 70th anniversary of the London Blitz. In loving memory of our father Pinkus Nirenstein, brother Phillip and sister Freda, her fiancé Morris Wolkind and the seven other people who lost their lives when a bomb destroyed 35 Harrington Square on September 9th 1940.

On behalf of Sophie, wife to Pinkus, and the siblings that survived: Phyllis Hillel, David Niren, Lily Mitchell, their children and grandchildren.

This bouquet of dried flowers was tied to a tree in the garden not too far away. The writing was illegible or uninformative so we have no idea whether it was connected to the Blitz bench but it is much more interesting, visually, than a photo of the plaque on the bench.

The house that was hit was no 35 Harrington Square - the street behind the bench, the whole northern end of which has had the Victorian terrace replaced with a post-war block of flats.  We thank Jamie Davis for finding this link to the British Pathe news film of the aftermath, which starts at about 1 minute in.

This section lists the subjects commemorated on the memorial on this page:
Blitz bomb in Harrington Square

As well as the four members of the Nirenstein family another seven people die...

This section lists the subjects who helped to create/erect the memorial on this page:
Blitz bomb in Harrington Square

Of a family of seven, four survived.  On the night of the bomb Sophie the mot...