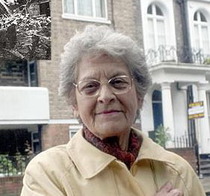 Of a family of seven, four survived. On the night of the bomb Sophie the mother had been staying with her sister in Brent. Her eldest daughter (Phyllis Hillel) was working away as a Land Girl. 16-year-old David (David Niren) was buried in the rubble and dug out after 10 hours. 12-year-old Lily had been evacuated to Bedford. Our picture shows Lily Mitchell, aged 82, at the time the bench was erected.

This section lists the memorials created by the subject on this page:
Nirenstein family that survived

This bouquet of dried flowers was tied to a tree in the garden not too far aw...

A general group of people.