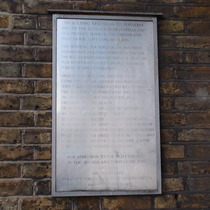 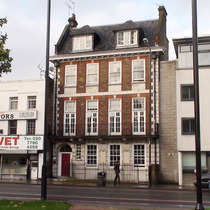 This building, erected in 1912, formerly housed the Beth Holim, or hospital, and old people's home of the Spanish and Portuguese Jews' Congregation.
The hospital, founded in 1748, was first established in Leman Street, E1, then in 1790 was transferred to this site. In 1977 it was removed to Forty Avenue, Wembley where it now flourishes.
Behind this building lies the first cemetery of the Spanish and Portuguese Jews who fled from the persecution of the Spanish and Portuguese inquisition to find religious toleration and freedom in this realm.
They formed in the City of London in 1656 the Congregation called 'sha'arhashamayim', the Gate of Heaven, which is still in existence. It was the first professing Jewish community in the British Isles to be established in modern times and formed the origin of the present Jewish community of Britain as a whole.

This section lists the subjects commemorated on the memorial on this page:
Spanish and Portuguese Jews - 1

In 1290 Edward I expelled Jews from England and for centuries, apart from tho...

Initially called 'sha'arhashamayim', the Gate of Heaven, this was the first p...

This section lists the other memorials at the same location as the memorial on this page:
Spanish and Portuguese Jews - 1