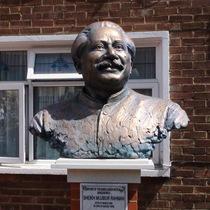 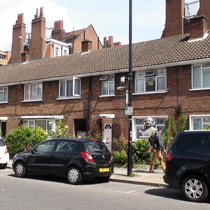 We cannot discover the name of the sculptor, unless that is Fuhad Ahmed Farahad, about whom we can find nothing.

December 16 is Victory Day in Bangladesh. In 2016 it was the day before the Saturday unveiling.

Erected in front of Sadek's house, which seems also to serve as the Awami League's London base, this bust caused objections to be raised with Tower Hamlets who, after consideration, gave it permission.

This section lists the subjects commemorated on the memorial on this page:
Sheikh Mujibur Rahman bust

This section lists the subjects who helped to create/erect the memorial on this page:
Sheikh Mujibur Rahman bust

Bronze. Replica of the bust in St Paul's. Albeit this is a relief rather than...