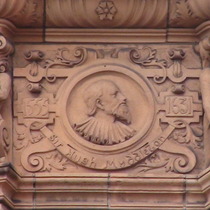 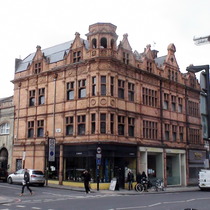 {Below the bust:}
Sir Hugh Myddleton

We have seen other websites where this building is confused with Myddelton Hall, which is the building further up Almeida Street, now used as the Almeida Theatre.  Our building, heavily decorated with terracotta details, is described in detail at British Listed Buildings.  As well as Sir Hugh on the corner, between the first and second floor windows, it carries a number of other relief busts and other figures depicting more than the usual number of joker characters but none of the others are portraits, as far as we can tell.

This section lists the subjects commemorated on the memorial on this page:
Myddelton bust

This section lists the other memorials at the same location as the memorial on this page:
Myddelton bust

This bust, high up in the pediment, is supported on each side by a muse, in t...