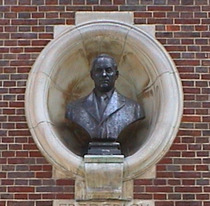 In a niche over the original central entrance (now mainly disused in favour of the north entrance).

This section lists the subjects commemorated on the memorial on this page:
Frederick Craufurd Goodenough

This section lists the other memorials at the same location as the memorial on this page:
Frederick Craufurd Goodenough

At one time the pub was owned by Thomas and John Shakespeare, who liked to th...