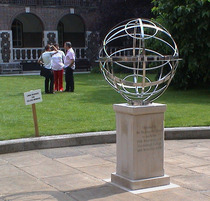 {On one of the rings:}
By wisdom a house is built and through understanding it is established. Through knowledge its rooms are filled with rare and beautiful treasures. Proverbs 2.3 and 4.

{On another ring:}
Donated by Sir Christopher Wates, Chairman of the Governing Council 2006.

{Engraved in the stone plinth:}
Unveiled by Her Majesty the Queen to mark the 75th Anniversary of Goodenough College, 10th November 2006.

This section lists the subjects commemorated on the memorial on this page:
75th Anniversary of Goodenough College

This section lists the subjects who helped to create/erect the memorial on this page:
75th Anniversary of Goodenough College

This section lists the other memorials at the same location as the memorial on this page:
75th Anniversary of Goodenough College