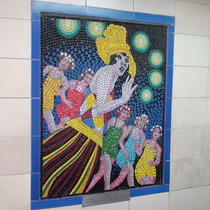 The Pleasure Garden, 1926
A good old-fashioned melodrama, full of life, death and passion, this was Hitchcock’s first feature as sole director and conveys his enthusiasm for the theatre and the music hall.

“Once a man commits himself to murder, he will soon find himself stealing. The next step will be alcoholism, disrespect for the Sabbath and from there on it will lead to rude behaviour. As soon as you set the first steps on the path to destruction you never know where you will end. Lots of people owe their downfall to a murder they once committed and weren’t too pleased with at the time” – Alfred Hitchcock.

This section lists the subjects commemorated on the memorial on this page:
Hitchcock mosaics 06 - The Pleasure Garden, 1926

This section lists the other memorials at the same location as the memorial on this page:
Hitchcock mosaics 06 - The Pleasure Garden, 1926