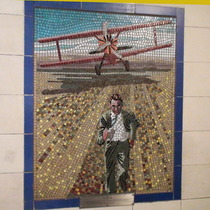 Hitchcock’s supreme chase comedy-thriller in which Cary Grant, as urbane businessman Roger Thornhill, is mistaken for a spy and is pursued across the country by both enemy agents and the police. In this famous scene his life is threatened by, of all things, a crop-dusting aeroplane.

“It is only when you adopt the basic premise that Cary Grant could not possibly come to harm that the tongue in Hitchcock’s cheek becomes plainly visible.” – Hollis Alpert, Saturday Review.

This section lists the subjects commemorated on the memorial on this page:
Hitchcock mosaics 04 - North by Northwest, 1959

This section lists the other memorials at the same location as the memorial on this page:
Hitchcock mosaics 04 - North by Northwest, 1959