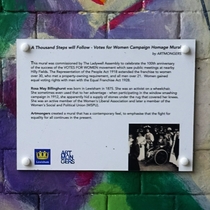 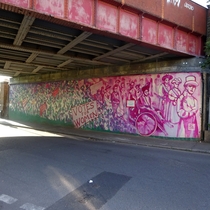 {Plaque on the mural with a photograph of Rosa May Billinghurst:}
A thousand steps will follow - Votes for women campaign homage mural by Artmongers.
This mural was commissioned by The Ladywell Assembly to celebrate the 100th anniversary of the success of the Votes for Women movement which saw public meetings at nearby Hilly Fields. The Representation of the People Act 1918 extended the franchise to women over 30, who met a property-owning requirement, and all men over 21. Women gained equal voting rights with men with the Equal Franchise Act 1928.
Rosa May Billinghurst was born in Lewisham in 1875. She was an activist on a wheelchair. She sometimes even used that to her advantage - when participating in the window smashing campaign in 1912, she apparently hid a supply of stones under the rug that covered her knees. She was an active member of the Women's Liberal Association and later a member of the Women's Social and Political Union (WSPU).
Artmongers created a mural that has a contemporary feel, to emphasise that the fight for equality for all continues in the present.
Lewisham
Artmongers

The mural was due to be completed in 2018, to mark the centenary of votes for women, but was delayed because Network Rail were carrying out repairs to the bridge

This section lists the subjects commemorated on the memorial on this page:
Votes for Women campaign hommage

Women's suffrage movement. It seems that many of these groups merged to form ...

Suffragette. Born in Lewisham. As a child, she survived poliomyelitis and had...

This section lists the subjects who helped to create/erect the memorial on this page:
Votes for Women campaign hommage

An art company, set up by Goldsmiths College graduates Patricio Forrester and...

An initiative set up by volunteers to promote the activities of local groups,...