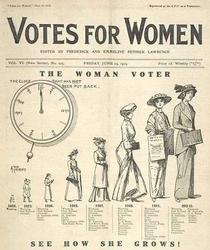 The Titanic sank in 1912 when the campaign for 'Votes for Women' was at its height. In a Guardian article on 30/3/13 Jeanette Winterson wrote “After Titantic sank, with its too few lifeboats and women and children first policy, the popular press ran a series of anti-suffrage stories called Votes or Boats. "When a woman talks women's rights let her be answered with the word Titanic – nothing more, just Titanic."

This section lists the memorials where the subject on this page is commemorated:
Votes for Women

School teacher and one of the first paid members of the Women's Social and Po...