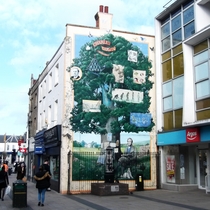 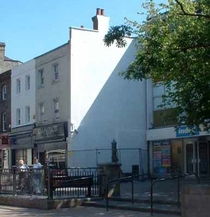 This mural replaced the one featuring H. G. Wells. Darwin is shown sitting at the foot of a tree which contains illustrations of various aspects of his work. There is also a portrait of Wells, (presumably as a nod to the previous mural), who was a devotee of Darwin's thinking. Darwin's claim to be a resident of Bromley is somewhat tenuous, as his former home (Down House) is only just within the boundary of the borough.

Our photograph showing the blank wall was taken from a website which no longer exists. The Wells mural was replaced by the one for Darwin.

This section lists the subjects commemorated on the memorial on this page:
Charles Darwin mural

Father of the theory of evolution and natural selection. Born at Shrewsbury....

This section lists the subjects who helped to create/erect the memorial on this page:
Charles Darwin mural

Artist. He describes himself as 'a figurative, expressionist painter who is c...

This section lists the other memorials at the same location as the memorial on this page:
Charles Darwin mural

The mural featured a portrait of Wells and pictorial references to some of hi...

2021: We were contacted by Sarwar Ahmed who wrote "The information you hold i...