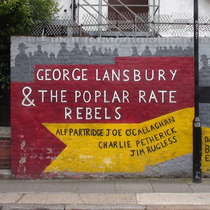 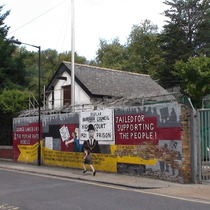 {On white notice behind mayor's head:}
Poplar Borough Council marching to the High Court and to Prison, 1921.

Jailed for supporting the people!

{3 placards held by a group of people at the right end are all illegible except:}
This mural painted by Mark Frances

The mural refers to "30 councillors" but actually names only 29.  The count of 30 is confirmed elsewhere and at Island History we we found a partial list of the names which had one that we did not find on the mural: Sue Lawrence.

From the absolutely excellent London Mural Preservation Society: "Originally painted by Mark Frances, the mural features four panels telling the story of the Rates Rebellion, mostly in words. It depicts George Lansbury and local residents holding 'Can't Pay Won't Pay' placards, in reference to the anti-Poll Tax campaign of the early 1990s, contemporaneous to when the mural was first completed. Names of the imprisoned Councillors feature along the bottom.  The mural was restored in 2007 by David Bratby and Maureen Delenian with help from local children."

September 2021: Diamond Geezer reported that the mural "has been given a repaint to celebrate the centenary".

This section lists the subjects commemorated on the memorial on this page:
Poplar Rate Rebels mural - 1

In 1855, Poplar joined with neighbouring Bromley and Bow to form the Poplar D...

This section lists the subjects who helped to create/erect the memorial on this page:
Poplar Rate Rebels mural - 1

Mural painter active in 1990 in Poplar.

This section lists the other memorials at the same location as the memorial on this page:
Poplar Rate Rebels mural - 1