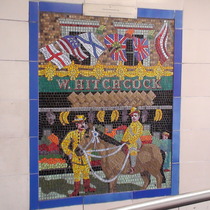 The photograph on which the design of this mosaic is based is analysed in detail at The Alfred Hitchcock Wiki and the conclusion is that the boy is probably Alfred's brother; the shop is probably not 517 but another one that the boys' father also ran, on the other side of the road; and that it was taken in 1900, not 1906. If you like detail (and we do) the analyis is a fascinating examplar of how to do the job right.

This section lists the subjects commemorated on the memorial on this page:
Hitchcock mosaics 17 - Young Alfred outside his father’s shop

This section lists the other memorials at the same location as the memorial on this page:
Hitchcock mosaics 17 - Young Alfred outside his father’s shop

{Four plaques to the right of the mural:}Creekmouth Heritage ProjectAbout thi...

Part of an extensive mural created by Harrow Council and local schools, this ...