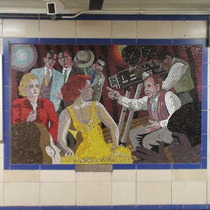 Hitchcock at Work
In a directorial pose from the Skin Game of 1931 Hitchcock is imagined directing some of his stars, including Margaret Lockwood, Ingrid Bergman, Peter Lorre and Cyril Richard.

“In Hitchcock’s eyes the movement was dramatic, not the acting. When he wanted the audience to be moved, he moved the camera. He was a subtle human being, and he was also the best director I have ever worked with.” – Bruce Dern, actor.

This section lists the subjects commemorated on the memorial on this page:
Hitchcock mosaics 03 - Hitchcock at Work

This section lists the other memorials at the same location as the memorial on this page:
Hitchcock mosaics 03 - Hitchcock at Work