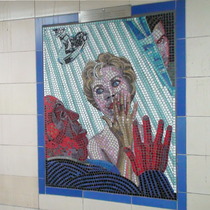 “At the end of Psycho, I realised I’d worked with the director who’d been more open to the actor’s suggestions and ideas than any I’d worked with” – Anthony Perkins.

“Psycho gave me very wrinkled skin. I was in that shower for seven days... At least he made sure the water was warm.” – Janet Leigh.

This section lists the subjects commemorated on the memorial on this page:
Hitchcock mosaics 07 - Psycho, 1960

This section lists the other memorials at the same location as the memorial on this page:
Hitchcock mosaics 07 - Psycho, 1960