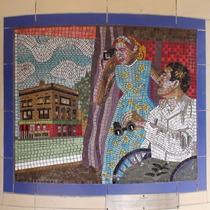 Rear Window, 1954
James Stewart as action photographer LB Jefferies is confined to his apartment by a broken leg. With the help of fiancé Lisa Freemont, played by Grace Kelly, he begins to suspect a murder has occurred and sets out to resolve the crime.

Stella (Thelma Ritter): “We’ve become a race of Peeping Toms. What people ought to do is get outside their own house and look in for a change. Yes sir. How’s that for a bit of homespun philosophy.”

This section lists the subjects commemorated on the memorial on this page:
Hitchcock mosaics 08 - Rear Window, 1954

This section lists the other memorials at the same location as the memorial on this page:
Hitchcock mosaics 08 - Rear Window, 1954

The photograph on which the design of this mosaic is based is analysed in det...