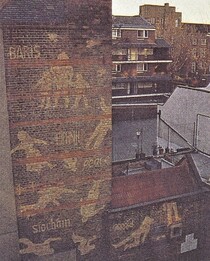 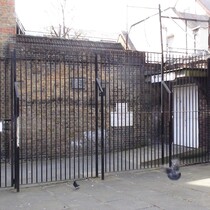 In 2022 Geoff Staden kindly sent us the photo of the mural and the following text explaining how it came about:
"Our peace mural in Crowndale Road was made for Camden Council and one of several public works that they commissioned from artists. In the 1980s the proliferation of atomic weapons was a highly contested issue, and Camden was among those local authorities which declared themselves ‘nuclear free’.

"The idea for our artwork arose from participation in the International Shadow Project, which originated in the USA. The concept aimed to simulate the effect of vaporised victims at Hiroshima and Nagasaki in 1945, whose only remains were their ghostly silhouette. In 1988 the building that hosted our mural, was home to a Greek Cypriot Centre, and the community arts venue, Theatro Technis.

"The figures for the mural were obtained from volunteers at a nearby youth club, and passersby on site, who allowed us to draw their outline on large sheets of paper. These silhouettes were then cut from hardboard with a jigsaw which, in turn, we fixed to the wall to enable the sandblasting company to do their part of the process. We also added the word ‘peace’ in the various languages of the principal local ethnic groups.

"Throughout the 1980s we were active in the peace movement, and often used our skills as artists to highlight the issue. We also campaigned against unethical sponsorship of the arts. In particular, we mounted protest pickets against exhibitions at the Tate Millbank, which received funding from a company that made parts for Cruise missiles.
Paul Donnelly & Geoff Staden"

The door to the right is the entrance to Theatre Technis.

This section lists the subjects commemorated on the memorial on this page:
Hiroshima - College Place - mural

This section lists the subjects who helped to create/erect the memorial on this page:
Hiroshima - College Place - mural

Artist. We think Donnelly may be the instructor mentioned in this 2010 Cerami...

Artist. We believe Glimpse @53 is about our man: "London born Geoff went to G...

This section lists the other memorials at the same location as the memorial on this page:
Hiroshima - College Place - mural

We believe this plaque was erected in 1985, the 40th anniversary of Hiroshima...