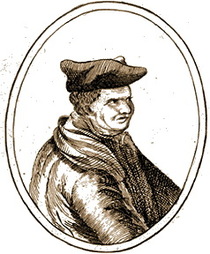 Bishop of London 1539-49 and 1553-59. This was a period when a job in the church was a fraught occupation. Bonner fared better under Catholic monarchs, but not much.

As chaplain to Cardinal Wolsey he was involved in Henry VIII's attempts to achieve papal authorisation for a divorce. 1549 during the short reign of Protestant Edward VI he was deprived of his bishopric and committed to the Marshalsea Prison for religious malpractice. 1553, on the accession of Queen Mary he was freed and restored to his position. He was then criticised by both sides for being either too lenient or too extreme in his prosecution of heretics. 1559, a few years after the accession of Queen Elizabeth he was again deprived of his bishopric and returned to the Marshalsea, where he died.

This section lists the memorials where the subject on this page is commemorated:
Bishop Edmund Bonner

Full name: Royal Hospital and Collegiate Church of St. Katharine by the Tower...

Born Suffolk. 1806 he enrolled in the Independent academy at Homerton, then '...