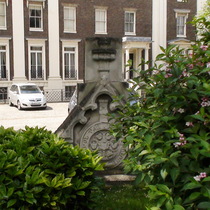 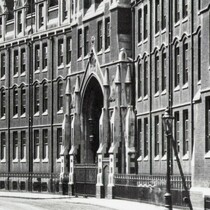 To the rear of the monument you will find a fire bell dating from the early 1800’s, this bell hung outside the previous headquarters of the Metropolitan Fire Brigade, 68 Watling Street, in the City of London, until 1878. The Watling Street building was originally the headquarters of the London Fire Engine Establishment which was renamed the Metropolitan Fire Brigade in 1865.

Our image of the building (bomb-damaged and demolished in the late 1960s) is a zoomed-in section of a photo we found at the excellent Beyond the Flames.  Above the entrance you can see the decorative stone-work which became the memorial in the bushes.

We took our photo of this memorial in 2017 and planned to come back, hoping to gain access so we could find the mentioned fire bell.  By the time we got back, 2021, at least 4 trees had gone, a 2-storey grey construction was occupying the site of the memorial and the rest of the garden/parking area was behind hoardings. We have to hope that the memorial and bell are safely stored somewhere and will reappear when the works are completed, but for now we have marked them as 'Lost'.

This section lists the subjects commemorated on the memorial on this page:
Fire Brigade HQ - Southwark

This section lists the subjects who helped to create/erect the memorial on this page:
Fire Brigade HQ - Southwark

{Etched in the glass doors:}Henriette Raphael gave her name to the first purp...