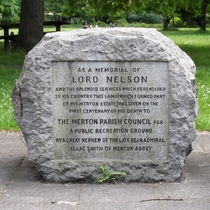 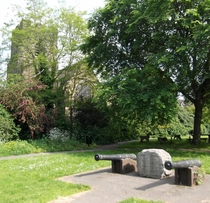 As a memorial of Lord Nelson and the splendid services which he rendered to his country, this land (which formed part of his Merton Estate) was given on the first centenary of his death to the Merton Parish Council for a public recreation ground by a great nephew of the late rear admiral Isaac Smith of Merton Abbey.

"The death" to which this inscription refers is Nelson's, so the gift was made on 21 October 1905 though the gardens were not opened until the following year. The land for the neighbouring church was given at the same time and St John the Divine built in 1914.

Interesting that Mackerell chose to honour Nelson rather than his own, not insignificant nautical ancestor, Smith.

Nelson Gardens lie within what were once the extensive grounds of Merton Place, Nelson's home, but these was never within the boundary of Merton Abbey.

This section lists the subjects commemorated on the memorial on this page:
Nelson - SW19

Merton was an ancient parish in the Brixton Hundred of Surrey. It was bounded...

Cousin to the wife of Captain James Cook, with whom he sailed to the South Pa...

This section lists the subjects who helped to create/erect the memorial on this page:
Nelson - SW19

Gave land in commemoration of Nelson in 1905.  Great nephew of Isaac Smith th...

This foundation stone was laid by the donor J. Passmore Edwards Esq on the 4t...