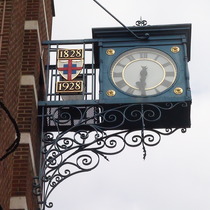 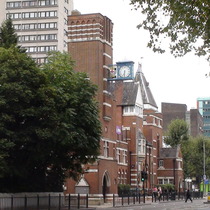 From VADS : "At the ceremony of presentation on Thursday 4 October 1928, the clock was set in motion by Richard H. Green. It was damaged in World War II and in September 1951, a new clock was installed.  The original clock was mounted on the tower on the road frontage in 1928 to commemorate the centenary of the foundation of the school (originally in Chrisp Street), fulfilling the original design by Sulman, of the clock tower."

This 1884 building was designed by Sir John Sulman. The bronze plaque is on the, hidden, east-facing side of the clock tower.

This section lists the subjects commemorated on the memorial on this page:
George Green School - Clock

Founded by shipbuilder George Green as an infants' school, at the corner of C...

This section lists the other memorials at the same location as the memorial on this page:
George Green School - Clock

Above this large, plain, plaque there is a small ornate stone with "G.S." on ...

This clock was presented by members of the association, pupils and other frie...

A London cycle courier died near this spot. Sebastian Lukomski. 23.02.04

See "2018" below for the event that this relief depicts. Camden's Public Art...