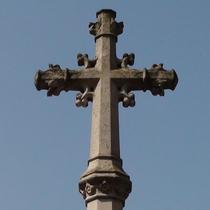 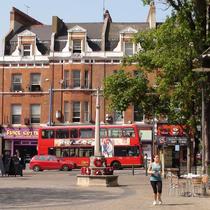 {The plinth of the cross is in three sections, one providing a seat. Inscriptions are carved into the stone of some of the faces, upper and lower, some clearly added after WW2 or even later. Starting with the side facing the road and going clockwise:}

{South, upper:} In memory of the men from Putney who fell in the great & victorious war.
{South, lower:} Greater love hath no man than that he lay down his life for his friends.
{East, upper:} In Honoured memory of
{East, lower:} the civilians of Putney who lost their lives in the Second World War.
{North, lower:} To those that paid the ultimate price in all wars and conflicts.
{West, upper:} The ?????????? war / In hon?????? memory of {Obscured by the firmly fixed wreath.}
{West, lower:} Men and women of Putney who gave their lives serving in His Majesty’s forces.

The Bridge plaque is on the far side of the wall beside the woman's head in our photo. The jubilee plaque is laid into the terrace between the road and the cross.

The Putney Debates plaque is inside the church, behind our camera, in the cafe area. And in the church we found a small but well-laid out exhibition (which has its own website) on the subject.

This section lists the subjects commemorated on the memorial on this page:
Church Cross - Putney

Putney civilians who lost their lives in WW2

Putney civilians who lost their lives in WW2

Putney men and women who fell in WW1

This section lists the other memorials at the same location as the memorial on this page:
Church Cross - Putney

So the churchyard must have occupied the ground between the church and the ri...