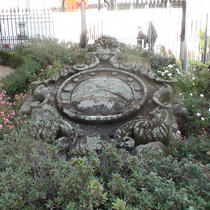 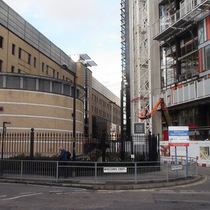 The assumption has to be that these are the remains of the building that was here before the current one was erected.

British History On-line gives: "In 1829 William Hunt, one of the governors, bequeathed £180,000 to the hospital for the fitting up of additional accommodation to hold at least 100 beds. Temporary wards, constructed out of old warehouses, were opened in 1830, but it was not until twenty years later that the small houses between Maze Pond and Newcomen Street were cleared away and Hunt's House was erected from the designs of Rhode Hawkins. The centre and south wing were finished in 1853 and the north wing in 1871."

So that's our best guess: that these are some architectural flourishes from the old Hunt's House, rescued in c. 2000 and displayed here, with no explanation.

This section lists the subjects commemorated on the memorial on this page:
Hunt's House at Guy's Hospital

Another, partial, view of this building here.  Dates approximate.

These large chunks of old masonry are in the small courtyard to the west of t...