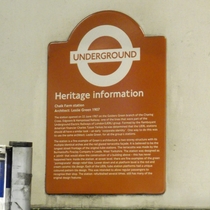 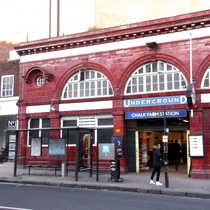 Underground Heritage Information
Chalk Farm Station
Architect: Leslie Green 1907
The station opened on 22 June 1907 on the Golders Green branch of the Charing Cross, Edgware & Hampstead Railway, one of the lines that were part of the Underground Electric Railways of London (UERL) group. Formed by the flamboyant American financier Charles Tyson Yerkes, he was determined that the UERL stations should all have a similar look - an early "corporate identity". One way to do this was to use the same architect Leslie Green, for all the group's stations.

The station is a fine example of Green's architecture, a two storey structure with its multiple identical arches and the red glazed terracotta façade. It is believed to be the longest street frontage of the original stations. The terracotta was made by the Burmantofts Fireclay Company in Leeds, West Yorkshire. The station was designed as a 'plinth' that would allow the construction of a building above - this has never happened here. Inside the station, at street level, there are fine examples of the green "pomegranate" design relief tiles. Lower down, and at platform level is the red and cream ceramic tile design. Each of the UERL tube station platform designs had a unique coloured pattern tile design. This was intended to allow regular passengers to recognise their stop. The station, refurbished several times, still has many of the original design features.

This is a London Underground station on the Edgware branch of the Northern Line.

This section lists the subjects commemorated on the memorial on this page:
Chalk Farm Station

Manufacturers of ceramic pipes and construction materials, named after the Bu...

First things first - pronounce his name to rhyme to with turkeys.  He has a c...

The fore-runner of the London Underground system. The London Electric Railwa...

This section lists the subjects who helped to create/erect the memorial on this page:
Chalk Farm Station