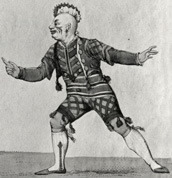 Pantomime clown appearing at Sadler's Wells, Drury Lane and Covent Garden theatres. The traditional clowns' make-up, being called Joey and many of the gags and tricks date back to Grimaldi.

Born in Stanhope Street, Clare Market which used to be between Lincoln's Inn Fields and the Strand. His father, Guiseppe, was an Italian immigrant living in Clerkenwell working as a ballet master and performer. Guiseppe was cruel, miserable (nick-named Grim-all-day) and had a dread of being buried alive and so stipulated that after his death his children should sever his head from his body. This grisly job was carried out by a hired surgeon while the corpse's daughter kept her hand on the knife. Joey's miserable upbringing turned him into an irresistibly funny clown and he was immensely successful. His stage act was very physically demanding, and damaging; aged 43 he was diagnosed with "premature old age". He died at 33 Southampton Street, now called Calshot Street and was buried in St James Church, Pentonville Road. The church has since been demolished but the grave remains in what is now Joseph Grimaldi Park. His son took over his father's roles but he died of drink and high-living aged 30 - the end of the Grimaldi dynasty.

David Mayer, Emeritus Professor of Drama, adds the following sad footnote: “Guiseppe Grimaldi infected his partner, Rebecca Brooker, and, through her, young Joey with syphilis. The symptoms of muscle spasm and excess fatigue reported to have limited Joey's career are evidence of congenital syphilis, something he half-acknowledged in his farewell address but which Dickens and later authors suppressed.”

There are two annual events in memory of Grimaldi. In 1946 clowns started attending an annual service at St James Church each February, that month being chosen since circuses were normally in London then. From 1959 the Joseph Grimaldi Memorial Service has been held on the first Sunday in February at the Clown's Church, Trinity Church United. This must be a bizarre event since the clowns all attend in full motley (make-up and costume).

We've heard that the residents of Islington hold a celebration during the summer half-term (end of May/start of June) and we've tried to attend but we cannot find any more information about it.  2013:  it seems this event ceased some years ago.

If there is any connection between the performing Grimaldis and the princely family of Monaco, into which Grace Kelly married, we have not found it.

This section lists the memorials where the subject on this page is commemorated:
Joseph Grimaldi

{On the grave stone:} To the memory of Mr. Joseph Grimaldi who departed this ...

Comedian, satirist and "only twin". Born Torquay. Founded and owned 'The Es...

Actor, often in comedy roles. Born in Blackgang, Isle of Wight, she was the y...